How has MOD affected your G.A.S.?

When I was initially looking for a MultiFX device, my goal was to curtail my G.A.S. I suppose that to some extent it has. I’ve purchased a few plugins which are an order of magnitude less expensive than pedals, and I’ve not bought any new amps or speakers. I have, however, purchased several IR packs. I’m considering buying more. But they are much less expensive than buying speaker cabinets amps and mics to record them. I guess the purchase of an FRFR cabinet should also be added to the mix.

Since the start of my MOD journey, I have only purchased a few pedals that I haven’t been able to replicate using the Dwarf.

In balance, I’d say the MOD has helped curtail additional gear purchases, so I’m thankful for that!

So, how has using a MOD device affected your G.A.S.?

The Duo X was supposed to be my Swiss Army knife, and hopefully my only piece of gear for most small gigs. Just did not have enough time with it to make that happen.

Sorry! I meant to expand that, but forgot. @QuestionMarc is correct

that was my exact goal. I’m always looking for new stuff that I don’t really need - just to see whats out there and not to miss anything.

The DWARF only got me halfway there. I want to replicate certain pedals (shiftline everest, Collision Devices Nocturnal) with the dwarf and have an amp sim and irs. Turns out the amp sims and irs are the weak spot. Not to mention the cpu limit.

I really considering to buy a second dwarf. One for amps one for fx. But this adds even more latency - not to mention availability.

Not to mention the cpu limit.

The DuoX is of course also limited in terms of CPU, but what you can do with it is OK, it feels like twice as much as with a Dwarf CPU.

The DuoX is only one component of many, every device/instrument has its advantages and disadvantages. It can’t replace a Sherman filterbank for example. Which is OK though, I don’t like the same sound all the time either and love new routings between the different devices.

My DuoX was entirely part of my GAS, and as such, it’s now just lying there on the pile of useless stuff I have on my desk, with its unfinished buggy footswitch.

The Dwarf however was not a compulsive purchase, it had a real specific purpose from the beggining: replacing my Pitchfactor and my looper while reducing the size and weight of my guitar pedalboard, which it does really well. As such, it doesn’t qualify as GAS afaik

One can do too much, and does nothing, the other is a little more limited, but is really useful.

… even harder than Covid! Maybe someday there will be a specialized clinic for a successful therapy approach…
I am completely cured! I too have constantly rebuilt my pedalboard, but since I got the Dwarf, this is no longer the case at all. I have completely minimized my pedalboard and now play three instruments (mandolin, mando guitar and guitar) as well as vocals exclusively through the Dwarf. My pedalboard constantly consists only of the Dwarf, a small digital mixer in stompbox format (to organize the input of the 3 instruments and vocals in the Dwarf), and two tiny midi controllers. I’ll update my report about my reduced pedalboard this evening and will add some photos of my current pedalboard for your information.

Can you elaborate on that?
I’m also going for a small board, maybe a drive and compressor in front, always preferred analog ones (while snnniiifing a cork!)
Thanks,

Turns out the amp sims and irs are the weak spot. Not to mention the cpu limit.

You know, at first I was not impressed with the amp models using the non-IR cab sims. I finally decided to load up some IRs for cabs, and it made a huge difference to my ears. For example, I didn’t have much love for the SuperSonic amp, but when I paired it with some official Jensen IRs for 4x10s or 1x12s, it really changed my opinion.

What aspect of the amp sims and IRs do you find lacking?

@spunktsch Do you think a similar capacity to the Duo X would make the difference?

I have a Neural DSP Quad Cortex for Amp/drive pedal captures and amp sims and the Duo X for Reverb IR’s. If they had a love child then G.A.S would be ‘almost’ non-existent for me.

I see the massive potential in Duo X for Amp sims/Captures, limitless routings and coding my own plugins to replicate my commonly used analog pedals (aka All I need!). Updates to the Quad Cortex are few and far between so path of least resistance points to the Duo X as a ‘one stop shop’ (with a good bit of graft!). I can build basic modulation circuits from delay lines using existing plugins and LFO’s but still need to figure out how to apply all the HP/LP filtering etc to tailor the sound and then make a plugin. Until then, I’m still window shopping

in danger of going O.T. here, but… speaking of small mixers for pedalboard use:

although i’ve historically avoided behringer, their recent MX400 (tiny 4 → 1 analog mono mixer) is a splendid unit, and perfectly sized for pedalboard use. i’m now using it to sum pickup signals from a few woodwinds, before routing into Duo X or Dwarf.

ooh! This might be an interesting option for our Chapman Stick folks on the forum.

I have one and it great. And it’s 12vdc centre positive same as Mod stuff.

Ammoon and others do even cheaper copies.

Initially years ago I had a Leem 8:2 mini mixer which was pretty cool too for around £30. 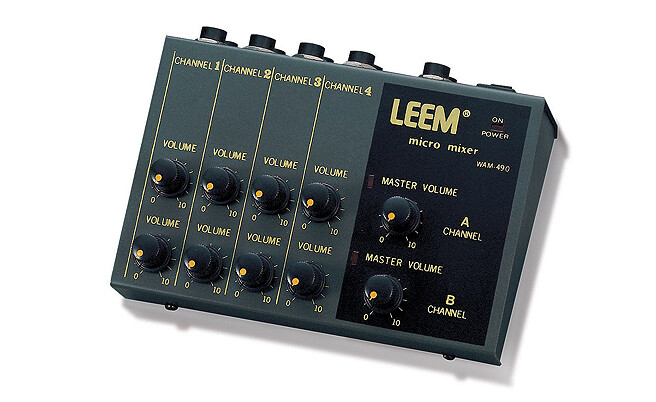 Regarding GAS - I bought a Helix to stop my pedal problem. Then I bought a Dwarf, then I completed Aliexpress!

If you are interested I have about 70 pedals and 18 guitars so just to let everyone know if you have GAS it’s incurable!

Sorry for the late response. I had no time before Christmas haolidays. Yes, it is a pleasure to show you this stompbox-shaped digital mixer. You can read about it here:

My new physical PedalBoard: Reduced to the max Random

My reduced physical pedalboard has now changed once again. The reason for this was another instrument that came along, I now play not only mandolin and guitar more, but also mandola. As already described, one of the instruments and, in parallel, my vocals are always connected to the Dwarf. I use the two channels of the Dwarf as mono inputs, one for the instruments, the other for the vocals. Until now, when I changed instruments, I unplugged the cable (with silent plug) from one instrument and p…

@Austin73 Yours look also awesome. But it seems to be a bit bigger as compared to the one from Elite Accoustics.

No it’s actually smaller and considerably cheaper… But why do I just dream of owning an elite mixer now. Dam GAS!

It would be a bit overkill for me, same as the 1010 stuff but I’m still jealous.

…may be a therapy is needed…

You know my next post I will have a full size Behringer X32 on my pedal board!

…and one day you will need a truck for pedalboard transportation…