How do you guys do metal?

Rather odd ways to do it but the other setups with usual suspect Titan or Onyx behind a pedal is either shriekingly thin or just loud and nowhere near saturated enough.

How do you guys get tight metal tones that pack distortion but keep low and lowmid power in a tight fashion?

It would be intuitive to put it in front of the amp but putting it behind it actually does it for me.
If oyu play around with that, you notice it’s @brummer MetalTone doing 80% to 90% of the work with a something fat, broad, mellow in front of it because the Metal tone adds cool disortion but makes it thinner.

I even experiment with a limiter to compress the waves even more without just going louder over the max.

one would say: go for the Mutant but it still isn’t optimised! a Mutant, a decent EQ and some gain pedals and the processor is drowning!

@brummer
You could basically build an amp out of a MetalTone, broader distortion rate so less distortion is possible and not all low | mid-low oomph is taken out.

Also, compared to other solutions, the MetalTone is so CPU friendly.

Let me know if you consider something like this.
You Fat frog an sich is just too “farty” and misses the tightness a heavy metal tone needs. The Metal Tones pulls it together but ut takes effort to keep enough low-mid

I use my amp profiler for metal tones. It’s not yet on the dwarf as it requires so additional changes to the file types needed in mod-ui, but so far I have some captures from some Neural DSP plugins that are super tight and fat. I have a bit more to do in the plugin before it gets to beta store, but hopefully it will soon! DM me if you wanna try it and I’ll send you the plugin and steps to make changes

I managed to manually install plugins before so at least I’m confident of trying that again.

You may try the GxKnightFuzz

The GxKnightFuzz is a distortion plugin based on the vintage Knight Fuzz KG-389 which was originally sold as a DIY kit in the mid 60s. This rarity was originally advertised as “The wildest sound you’ve ever heard” to an audience of young guitar...

in parallel to the MetallTone. That will bring you the low-end back.
Other then that I use a PowerAmp sim (this one simulate different Power Tube stages of different amps ( not available in the store))behind those, 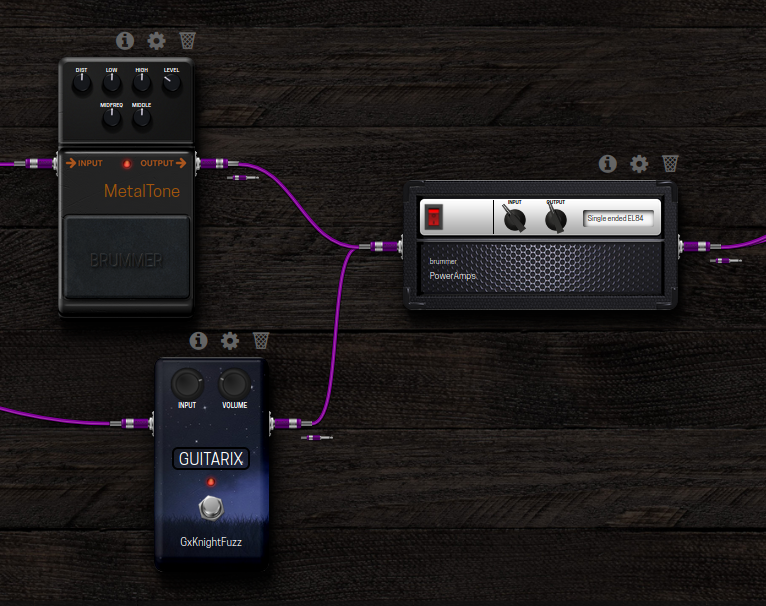 Alright, will check soon, thanks for the tip

PowerAmp sim (this one simulate different Power Tube stages of different amps ( not available in the store))behind those,

What’s the story behind that one?

Well, that’s a collection of (only) Power Amp Stages from different Amp simulations I’ve made guarded with in/output gain controls. I use it to archive a effect loop. So preamp stage → distortion → power amp stage → cabinet simulation.
It’s a plug I’ve made for my main project Guitarix and now wanted to try it on the MOD so make a quick plug to test it. The push pull stages working nicely with the MetalTone, Also the single ended EL84.
The single ended 6V6GT blow out to fast when feed from the MetalTone.

I also did a lot of trial and error and came up with a more tradition approach: tube screamer, Veja Titan, IR and an EQ (most important I think) for low and high cuts.

I just made a quick video showing the sounds I get.

That’s a much better sound than I ever got from the Titan.
I’m going to emulate this as soon as I’ve get the chance!
cool vid!

Not my style, but cool vid! Love the “Boutique Boost Pedal”

I started of recreating @spunktsch’ board here but it doesn’t work so well for my recorded dry guitar samples. Also, I don’t own the Titan but I went for my two current go-to amps: the FatFrog and Onyx.
(As much as I love the Mutant, it still has cpu spikes while the Onyx leave me constant and with 20% less cpu use).

Brummer showed me how the MetalTone and GxKnightFuzz are a metal couple: One takes care of the edgy high end, while the other fattens up the bottom and removes the fizz there. Great tip!

In the end, the Onyx was enough gain wise, as the “metal couple” of pedals does most of the heavy lifting here.

And so it happens that one way or another, that MetalTone geeps re-appearing in my boards

Btw; I already have a different preset that already works great in combo with our other guitarist so I’m already safe on that side… but yeah you always find news ways to experiment and improve.

This needs to be tested and tweakedat high volume through my 2x12 cab though.
My physical setup is:

My rig is just a smal pedal case and a portable 2x12 Laney cab!
with one press of the button, I switch to “acoustic guitar and vocal” mode and I can use my Acoustic amp. Love it. 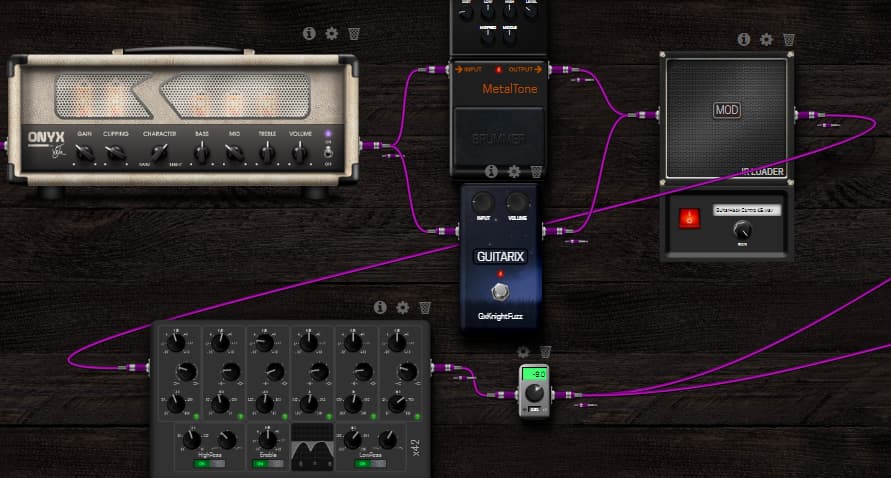 Brummer showed me how the MetalTone and GxKnightFuzz are a metal couple: One takes care of the edgy high end, while the other fattens up the bottom and removes the fizz there. Great tip!

This is the approach I take when distorting bass for a bi-amp style rig. Could for sure have some use in this case.