I think someone mentioned that was looking for pedalboards that are feasible to be used on the MOD DUO so I created this topic.

I´m also struggling to find solutions that make use of the newer plugins.
As of now I´m trying to maintain the CPU usage under 75% while using the Browser GUI via USB port.
Even with the load average on the CPU being at around 75%, I experience 100% peaks while editing the pedalboard.

Here it´s the pedalboard that I´m using these days.

did you check whats using the most cpu power and switch it out for a similar plugin?

This pedalboard is 4th version of it self!!!
The IR Convolver is “lighter” then other reverbs and I´m using the Tubewarmth instead of the GXSupersonic.
I also gave up using equalizers plugins, loopers, modulations for this pedalboard.
It´s possible to choose only one of the cab simulators and then the load on the CPU will be lower because I won´t need the Stereo X-fader and the Volume plugin after that.

if you get rid of all the volumes and xfade plugins does something change drastically in cpu usage?

We still need to write a proper description on the x42 IR convolver, but having it result in xruns while DSP load is “low” is somewhat expected.
This is because the plugin makes heavy use of background processing, so the “cpu load” you see on the web gui is not representative of the actual CPU time the plugin is taking.
It is a complex matter that we have been discussing in the team recently, leading to us considering showing “max dsp load” vs “average dsp load” (which is the value used now).

Not that it helps your pedalboard specifically, but want to mention it so it is clear why this behaviour is happening.

This is because the plugin makes heavy use of background processing, so the “cpu load” you see on the web gui is not representative of the actual CPU time the plugin is taking.

To some extent I think that I realized that behaviour and is the reason I´m aiming to 70 to 75% cpu load. Now that I know that is “average dsp load” that I see, probably is better to aim to 70%

Here it´s another try to get the sound that I want. 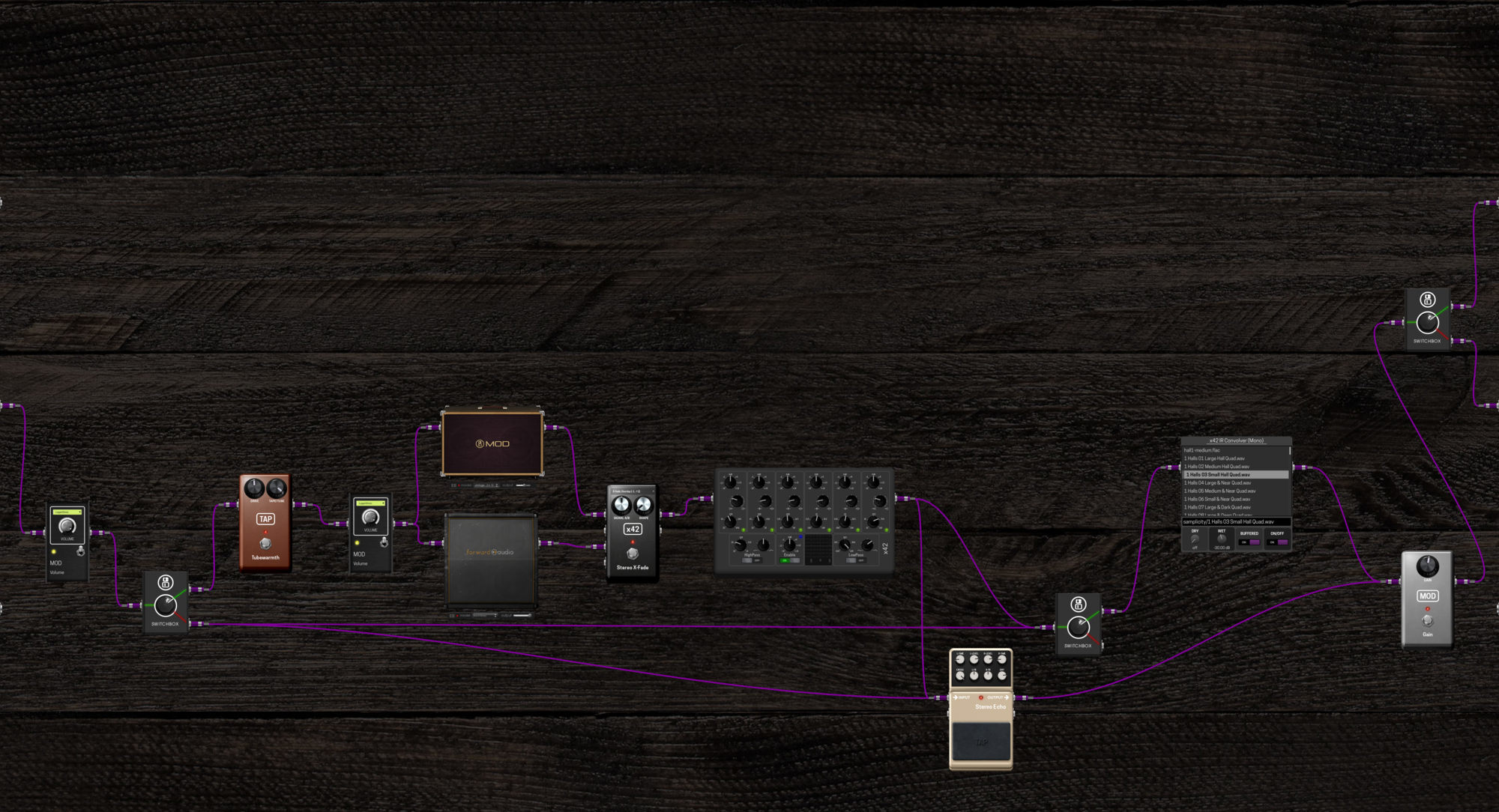 5th version of this pedal board. It´s sounding good but I´m at the edge of what the MOD Duo CPU can handle.

I´m at the 5th version of this pedalboard with a better understanding of the Stereo X-Fade plugin I was able to ditch one of the Volume plugins and now I can have the Eq.
The CPU is fluctuating between 80 and 90% and it was not possible to record the sample of the shared pedalboard due to the numerous X-runs.
So far I´m able to play this pedalboard without any glitches, even when connected via usb to the PC and the browser GUI.
It would be nice if someone else could try it with the Duo.

Yet another try.
A striped down version of the previous one. This time it was possible to record the sample and share.

Yet another version of the pedalboard

Roger -
Thanks for sharing those! I tried on my original mod duo and even though the CPU meter was only in the 30% range, I was still getting pops and clicks… Since I am new to the platform, I don’t know enough to be able to troubleshoot…

I have been browsing the online pedalboards and have made notes of which work with my plain mod duo, so I can start posting those here if that’s the intent of this topic.

Here’s one that I just tried and sounds nice -

Thanks for sharing those! I tried on my original mod duo and even though the CPU meter was only in the 30% range, I was still getting pops and clicks

This is expected if using IR convolver and your unit is on < 1.11.6
Some of the system tweaks made on that version are required by this plugin

Thanks for trying my pedalboard.
I think the first step to troubleshoot is to verify which MOD DUO system version that you have on your device and update it to the latest one (1.11.6) if possible.

About the IR Convolver plugin, as @falkTX mentioned here…

This is because the plugin makes heavy use of background processing, so the “cpu load” you see on the web gui is not representative of the actual CPU time the plugin is taking.

You won´t “see” the real CPU load when using this plugin.

My choice for the IR Convolver was because I wanted a good sounding spring reverb.
I´ll compromise on that and try to go back using the TAL-Reverb plugin so the pedalboard can have a more reliable performance.
There are other incredibly good sounding plugins on the plugin store but I´m running the reverb signal in parallel (all wet) and there are only a few of them that do not “bleed” the dry signal into the mix.

When you publish a pedalboard from the Web UI, it uploads an image of the board. You also have the option to record and attach a sound sample at the time of publishing.

Exactly as @malfunction54 said but that applies if you are sharing one of your pedalboards.
If you want to share someone else pedalboard you can simply copy the url and paste the link on your post and it will embed the image in the same way.

after I posted that, I got to wondering if the question pertained to the forum or the pedalboard site

Here it is the PB with the TAL-Reverb.

The Tal-Reverb back on the board. Trying to get a more reliable version of the PB

Hi. Did you tried to set latency to 256 samples. That’s still usuable and it’s you’ll have more cpu power. That’s what I was doing when I had a mod duo.

Well… that is indeed a possibility but personally I´ll not compromise my 128 buffer size because latency tends to accumulate inside the digital realm.

I rather use another device* than cope with bigger latency.

If someone finds interesting here are the difference on the 'CPU load" readings using 128 samples and 256 samples with the latest PB that I shared (RF Clean 5.3).

24% is a lot to work with. So for rehearsals and playing live seams very ok to use 256 samples as buffer size but I´m not doing any of that at the moment.