Ive cloned the DISTRHO repo and successfully compiled the MidiThrough and Metronome examples, but the Parameters and SendNote examples give this same error on make:

I have found this: Missing entry method in VST2 plugin,about DISTRHO/Cardinal - Coder Social but not sure if its relevant to my simple problem. All I want to do is produce lv2 plugins rather than vsts if that would help

Everytime you see a .gitmodules file on a repo, it is because submodules are in use.
I prefer to use this which is a one liner:

@falkTX
In my projects I use a little target to automate this step. Works like a charm.

Thanks for the answers so far. Having compiled the various example plugins - I was hoping that I could just copy them on to the moddwarf and they would run, but clearly not. I found somewhere else in the forums about a make modwarf command, but when I tried that, it seemed like there were a number of environment variables that had to be set -

I do have the mod-plugin-builder cloned - but in the above diagnostics what does mod-workdir refer to? And how do I tell the system where it is?

I highly recommend reading through the github page of MPB

And if possible use the docker image of cbix or build one yourself.

At least that is what I used to build the neural-modeler-plugin.

Thanks again - got here - got here in the sense that in ~/mod-workdir/moddwarf/plugins/ I did manage to generate a folder called d_midiThrough.lv2 which comes from the
DPF/examples/MidiThrough/ code

If everything goes well, you will have the final plugin bundle in ~/mod-workdir/<platform>/plugins

Is that what is expected?

However, the next step (publishing to the moddwarf) i dont quite understand. The documentation says:

I presume that means the script build from mod-plugin-builder/ - however my mind couldnt compute how I reference the just built package (in mod-workdir) from that script - is it just the name of the folder created (i.e d_midiThrough.lv2) - I tried that it didnt work.

Clearly I am not understanding something - if there any mistakes above if they could be pointed out that would be great.

But I think my mental model of the system is not right maybe. My model so far is something like this

Anyway, if anyone can help, I’d be very grateful!

You only need the mod-plugin-builder for its bootstrap, leave the rest to DPF, including building and pushing to MOD.
After the bootstrap process, you should only bother with mod-plugin-builder if you want to have your plugin on the plugin store or build the available plugins.

For local builds, again assuming bootstrap process has been run once, and you have latest DPF too (important as I just fixed a thing while testing this right now), just do:

The step regarding importing the “local.env” from mod-plugin-builder is not needed here either.
It is really just “make moddwarf && make modpush”, DPF does the hard part all behind the scenes.

Later on I will have the same setup for cmake-based projects, but for now this only works if using makefiles.

Thanks again - I tried this, but I get this error (the same one when attempting to do it manually)

Just one thing - (might be relevant might not) - I originally cloned the mod-plugin-builder in July, but didnt do anything with it till this last week. I therefore did a git pull and then a bootstrap moddwarf again. Could that have messed anything up? Oh, and just to be clear - bootstrap moddwarf should be done once - or should it be done every session that you might want to build things?

bootstrap is only needed once, ever.
there should be no need to re-run for dwarf, nothing on its toolchain changed in the last couple of months.

not sure what is going on for you, the bin directory ends up empty?
if you tweaked the makefiles I am afraid you messed up the build

try with GitHub - DISTRHO/Nekobi: DISTRHO Nekobi as-is instead of DPF itself (and its examples). note cloning needs --recursive for submodules.

Thanks for your patience. Here is the full sequence of commands from clone to make modpush

The output is not empty, but its just a single .so file

yeah you are doing a “cd” step too much. you run “make” on the root of the project folder, not in the plugins/Nekobi subfolder.
do that and it should work

Thanks again. Nearly there! Am getting different error now

yeah you need to install the tool/package that has qemu-aarch64-static.
on ubuntu and debian this is called “qemu-user-static”

this is needed in order to run the plugin binary directly, to generate the lv2 ttl data.

Thanks so much for your help 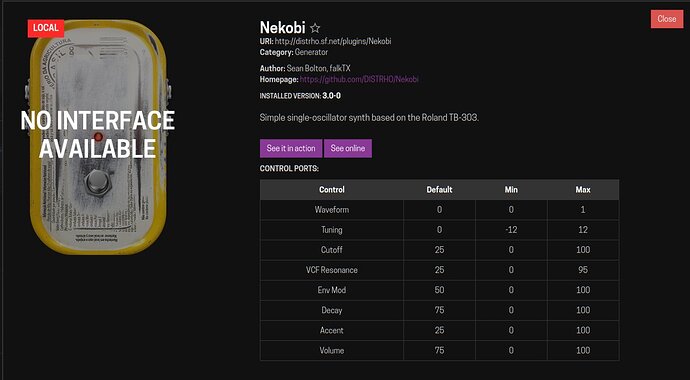